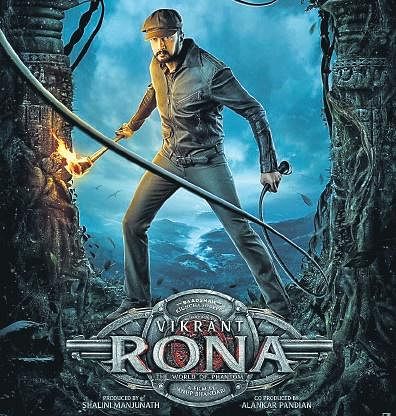 Vikrant Rona is an upcoming Indian Kannada language 3D fantasy action-adventure thriller film directed by Anup Bhandari. It features Kiccha Sudeep, Nirup Bhandari and debutante Neetha Ashok in the lead roles. Primary photoshoot began on 1 March 2020, and filming started on 2 March at Hyderabad under the title Phantom. Actor Sudeep began filming Kotigobba 3 and Phantom simultaneously. The producers originally planned to cast Sudeep's nephew Sanchith Sanjeev, but went with Nirup Bhandari instead. When the team preparing for second schedule COVID-19 pandemic hits badly and the works stopped. On 13 June, the crew announced they would resume shooting in July. Then on 16 July 2020, they resumed their work amid pandemic at Annapurna Studios, Hyderabad, by constructing huge dense forest set. Most of the filming done in Annapurna Studios and Ramoji Film City Hyderabad. Other shoots were done in Malshej Ghat, Mahabaleshwar and Kerala. Jacqueline Fernandez plays prominent role along with a song appearance.