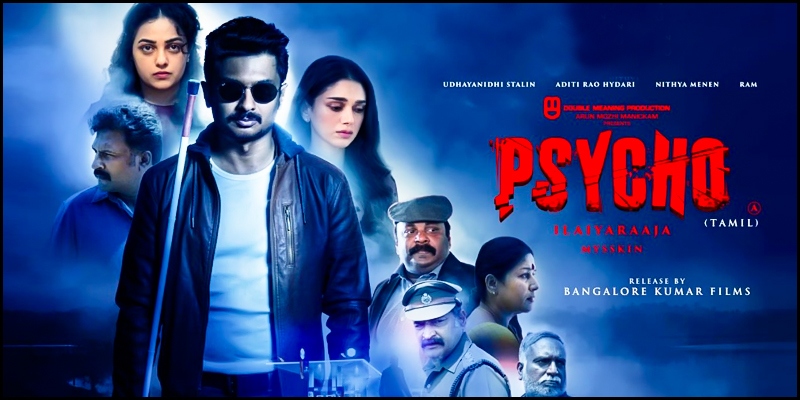 Psycho is a Indian Tamil-language psychological thriller film written and directed by Mysskin. The film was produced by Arun Mozhi Manickam under Double Meaning Production. The film stars Udhayanidhi Stalin, Nithya Menen, Aditi Rao Hydari, and debutant Rajkumar Pitchumani, while Renuka, Singampuli, Ram, Aadukalam Naren, and Shaji Chen play supporting roles. Ilaiyaraaja composed the soundtrack of the film, with cinematography by Tanvir Mir and editing by N. Arunkumar. Production began in September 2018, and the film released worldwide on 24 January 2020.
Psychopath Angulimala (Rajkumar Pitchumani) beheads only women and their heads are his trophies. Dahini (Aditi Rao Hydari), a leading radio jockey, gets abducted by the serial killer and when he is about to behead her, there’s a sense of calm on her face which challenges him. She also issues him a challenge saying that visually-challenged Gautham (Udhayanidhi Stalin) will come for him. Meanwhile, Kamala (Nithya Menen) a quadriplegic and an ex-sub-inspector would help Gautham in cracking the case. Will Gautham nab the psychopath and rescue Dahini despite his shortcomings forms the crux of the story.