U Turn is a 2018 Indian mystery-thriller film written and directed by Pawan Kumar and produced by Srinivasa Chitturi and Rambabu Bandaru under the banners BR8 Creations, V. Y. Combines and Srinivasa Silver Screen. The plot revolves around the death of motorists who break a traffic rule at a particular flyover and subsequent pinning down of the culprit by an intern journalist and police inspector duo. Filmed simultaneously in Tamil and Telugu languages, it is a remake of the director's own 2016 Kannada film of the same name. The film stars Samantha Akkineni, Aadhi Pinisetty, Bhumika Chawla, and Amit Suman. Principal photography commenced in February 2018 and ended in June. U-Turn is a songless film, featuring background score composed by Poornachandra Tejaswi and a promotional song composed by Anirudh Ravichander. The cinematography was handled by Niketh Bommireddy and editing by Suresh Arumugam. The film released on 13 September 2018, coinciding with the Ganesh Chathurthi festiva 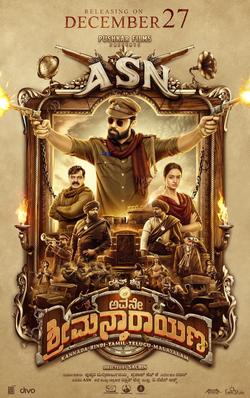 Cast & Crew of U TURN