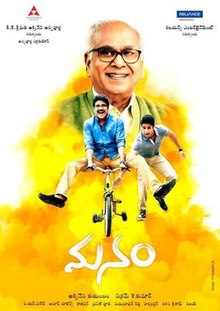 Manam (transl.?Us) is a 2014 Indian Telugu-language fantasy-drama film written and directed by Vikram Kumar, and produced by the Akkineni Family under the Annapurna Studios banner. The film stars Akkineni Nageswara Rao, Nagarjuna, Naga Chaitanya, Shriya Saran and Samantha Ruth Prabhu. The film is set in various time periods, over the course of a hundred years up until 2013, and deals with the concepts of rebirth and eternal love. The plot features a wealthy businessman, Nageswara Rao (Nagarjuna), attempting to bring a young couple together resembling his deceased parents and the elderly Chaitanya's (Nageswara Rao) attempts to bring the businessman and a doctor together. They resemble Chaitanya's deceased parents, who died because of a mistake committed by him in his childhood.