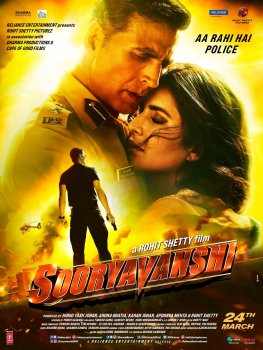 Sooryavanshi is an upcoming Indian Hindi-language action film directed by Rohit Shetty and produced by Reliance Entertainment, Rohit Shetty Picturez, Dharma Productions and Cape of Good Films, based on a script by Yunus Sajawal, Farhad Samji, Sanchit Bendre and Vidhi Ghodgadnkar and an original story by Shetty.[1] The fourth installment of Shetty's Cop Universe, it stars Akshay Kumar as Anti-Terrorism Squad chief DCP Veer Sooryavanshi opposite Katrina Kaif with supporting cast of Jackie Shroff, Gulshan Grover, Abhimanyu Singh, Niharica Raizada, Vivan Bhatena, Sikandar Kher, Nikitin Dheer and Javed Jaffrey. Ajay Devgn and Ranveer Singh in extended cameo appearances reprise their roles of Singham and Simmba from the franchise's previous films. Kumar's character was announced towards the end of Simmba that served as a character introduction of Sooryavanshi. Initially locked for theatrical release on 24 March 2020, Sooryavanshi was postponed due to the COVID-19 pandemic in India. The film was scheduled for theatrical release on 30 April 2021. As of April 2021, the release date of film has been postponed indefinitely due to rise in COVID-19 cases and lockdown in Maharashtra.