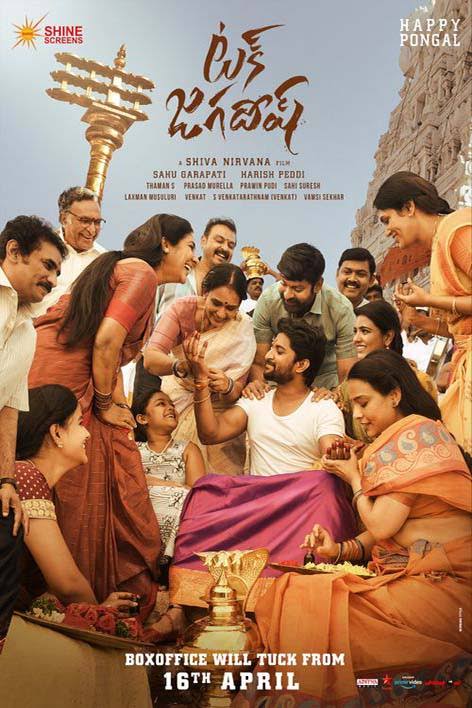 Tuck Jagadish is an upcoming Indian Telugu-language action family drama film written and directed by Shiva Nirvana. It is produced by Sahu Garapati and Harish Peddi under the banner Shine Screens. The film stars Nani, Ritu Varma, Aishwarya Rajesh and Jagapathi Babu in prominent roles. The film's soundtrack is composed by S. Thaman and background music scored by Gopi Sundar, with cinematography by Prasad Murella and editing by Prawin Pudi. The theatrical release of this film was deferred multiple times due to the COVID-19 pandemic and as result, Tuck Jagadish is now scheduled to release on 10 September 2021 on Amazon Prime Video coinciding with the festival of Ganesh Chaturthi In August 2019, sources claimed that Nani will collaborate with Shiva Nirvana, for an untitled project, marking their second collaboration after Ninnu Kori (2017). The film was reportedly produced by Sahu Garapati and Harish Peddi, under the banner Shine Screens. The film's title poster was released on 3 December 2019, with the title being revealed as Tuck Jagadish.Although there was no information on the genre or the plot, it speculated that the protagonist's character in the film will be reportedly suffering from bipolar disorder, for which Nani clarified that the news is false. Nani is also said to be distancing from experiment genres, post the dismal outing of V.