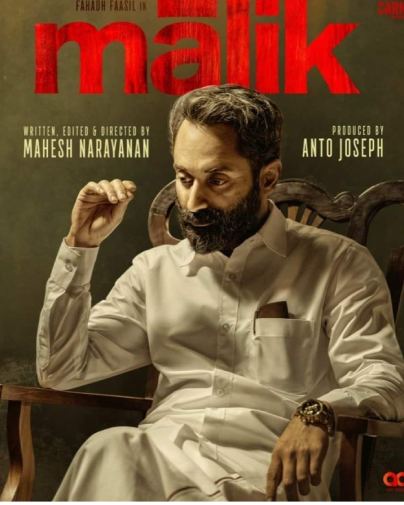 Malik is a 2021 Indian Malayalam-language political thriller film directed, written and edited by Mahesh Narayanan. It was produced by Anto Joseph through Anto Joseph Film Company along with Carnival Movie Network. The film stars Fahadh Faasil, Vinay Forrt, and Nimisha Sajayan, with Jalaja, Joju George, Dileesh Pothan, and Indrans playing supporting roles. The music was composed by Sushin Shyam. Principal photography began on 3 September 2019 and completed on 18 January 2020, with major portions filmed across Kochi, Thiruvananthapuram and Lakshadweep. Cinematography was handled by Sanu John Varghese. The film's theatrical release was postponed multiple times due to COVID-19 pandemic, and was later opted for an OTT release through Amazon Prime Video on 15 July 2021. The plot of the film might be loosely based on the 2009 Beemapally police shooting. The theatrical release of Malik was delayed due to the COVID-19 pandemic. The film was released on Amazon Prime Video on 15 July 2021, to positive reviews from critics. Ahammadali Sulaiman is the godfather of Ramadapally, a coastal town in Thiruvananthapuram where Muslims and Christians live together. He prepares to undertake the Hajj pilgrimage in his middle years on the insistence of his Christian wife Roselyn. Ali and his friend Aboobacker, a political leader, are on the verge of fallout over land acquisition from the locals for a harbour project. At the airport, the police arrest Ali under the Terrorist a